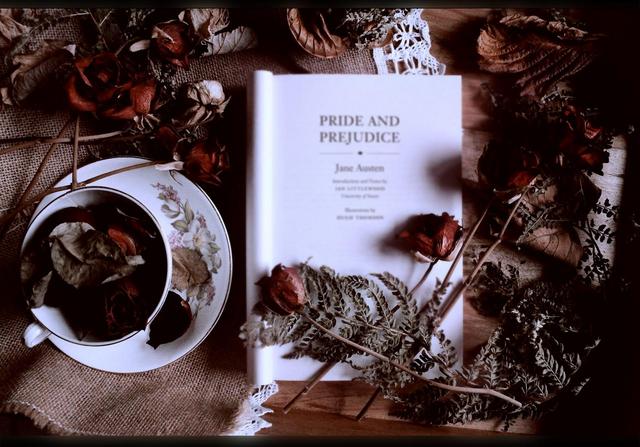 Swirling about, her feet sink into the meadow's plush grass. Jane smiles looking up at her ink-stained fingers. As her fingers begin to move, muscle memory plays music.

She stops, anticipating the journey. She has a long walk ahead of her as her friend's house is miles away. As her smile returns, her feet begin to take her home.

"The library." She considers her sanctuary in a bustling home.

Amongst siblings and boarders, she's inspired to write. With acceptance and home-schooled learned mind, she anticipates her nightly dream of novelist.

Jane spends much time contemplating the way of beings. She innately understands the subtext of the human condition and creates her novel-minded path accordingly.

Jane's deeper view of her surroundings often nudges her subconscious to remember just how arduous a climb her past life was. That awareness is not as important to this life. Her laser focused insight on the manner in which a woman can navigate life did her no favors. As in this lifetime, navigating current culture as a witness to expansion is key to her success.

Finely dressed for the ball, Jane he spins about in the front of a long mirror that leans against the wall near the ballroom. Her friend laughs and nods in approval. They both float toward the music and dancers.

"May I have this dance?" The gentleman's hand extends towards Jane, his head tipped to the side.

Jane is curious about the kind eyes before her. "You may," her hand meets his.

The evening lightens Jane's energy as she connects, in earnest, with another. She believes he 'gets her.'

"You've seen this gentleman often, Jane. You flirt with him." Her sister sits on the bed watching Jane pour over the watercolors she painted for Jane's most book.

Jane stops to consider smiling, looking up her quill between her fingers. "I enjoy his company and he's intelligent, a lawyer, as well as fine humored."

Her sister changes the subject, "So will the little paintings work for you?"

"Yes." Jane nods while looking at the small renderings. "They are lovely."

"Good as I won't be revisiting the subject." Her sister laughs. "Jane," solemn, "Is it his status?"

Jane takes a moment to reply, "No." shaking her head, "It isn't." She smiles as she takes a breath and allows.

Jane's deeper view of her surroundings, often nudges her subconscious to remember just how arduous a climb her past life was, an awareness not important to this lifetime.

Unfortunately, her economic status does not meet her gentleman's family's approval. Reluctantly, Jane is cast aside.

Her laser focused insight on the manner in which a woman can direct her own life does her no favors. Navigating current culture as a witness to expansion is key to her success. Jane looks through understanding considering her current trajectory.

Life leads Jane's family to Bath. After much consideration, they land in a simple house of their station. She absorbs the gentry's way of being enamored by the glamor.

Spending time in friend's and family's estates, boredom sets in. Jane writes little plays that are acted out by friends. Jane becomes accustom to what life looks like in these grand homes. She does her part.

"That was such an entertainment!" her friend still charged by the acting out of Jane's musings.

"We didn't even have enough chairs for everyone!" another clasping her hands together then hugging Jane.

In the flow of this way of life, Jane finds herself in the company of a fine young man that desires her hand. That evening, she agrees. The next morning, her drive to write overshadows her decision and she recants.

Jane's life leads to shedding Bath as sickness and poverty blankets her family.

Her success carved as her own, Jane had stopped writing novels while living in Bath. Her habits circular, she resigns to where she returns for what it is, no wealth or stature.

Introspectively, Jane moves to the country. Her body and mind immediately remember. Her quill now often filled with ink. Renewed in way of being, she accepts this higher realm: a return integrated and open to opportunity.

In the spirit, Jane spends time in London. Her novels out in the world, she immerses herself into life in the city. Riding around London in her brother's barouche, she senses she is now an accomplished novelist. The country walks set aside.

Jane's writing expresses with an integrated mind. The elegance of place, the sense of achievement that surrounds. As the wheel turns, Jane's brother takes ill, Jane is left to negotiate with the publisher and loses.

Jane returns again to the country. This time, to a home for single women of age. Her last stop for this lifetime.

Jane's pot of gold was ever present: maintaining a flow, in lieu of pushing against the overarching energy; a poised and wise approach to what exists before her. Fully aware of the subtext of culture and daily life, the key was playing within paradigms and right timing.

Evolved, her next life goes deeper within the realms of being, the unseen. The integrated mind, her compass.

A fiction piece inspired by:

Documentary of Jane Austen: Behind Closed Doors On YouTube

Lovely piece about a fascinating woman. She was so much more than a stack of books.

is writing fiction on Patreon