The Raven and the Mouse 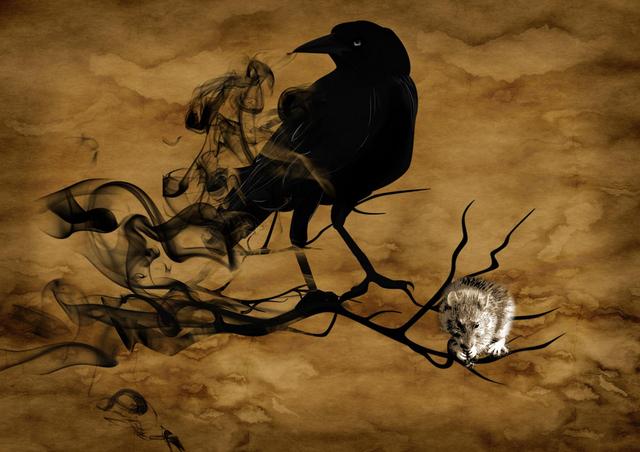 Ever aware of the fast moving furry creature with the long tale, Raven assesses best trajectory toward her prized pecan tree. Taking flight her wing span dark shines in the cool sun. She's hungry and peeved that little creature follows her always in pursuit of dropped sustenance.

Banking, her left wing tips upward as she looks down spying the annoying rodent with ease. Raven rights herself and flaps gaining speed. Her eyes forward. Target somewhere farther away from the trailing mouse below.

Mouse looks up and smiles waving at the Raven while admiring her beauty. Mouse is so thankful for the nibbles Raven drops.

"It's like lunching together." Mouse twitches her whiskers her eyes trained upward grinning at her fast friend.

This trek is more challenging for Mouse as the raven has gain elevation and appears to be in a bit of a hurry. Mouse is not willing to disappoint so she speeds along taking risks jumping across the larger rocks as the terrain is rough in comparison to the grasslands where the tasty pecans grow.

She doesn't give up.

"Are-you-kidding-me?!" Raven is starving and quite surprised by the mouse's endurance.

She banks again heading back to the pecan trees hoping that the mouse will be left in the dust long enough for her to have her fill.

Mouse is shouting skyward having course corrected on a dime. "I agree bird! The pecan grove is much better place to have a bit of a nosh,"

Raven's eyes narrow with disgust, "Is she squeaking at me? That little brown furry creature cannot reach me!"

On target Raven zeros in are her favorite tree. Unbeknownst to her, it is just next door to the mouse's cozy burrow.

Landing gracefully on the tree's limb, Raven grasps a pecan with her strong and sure beak and heads for the sky. Honing in on the rock beside the waving pecan tree, she drops her snack.

Raven calls a shrilling sound thrilled and at the same time in a bit of a hurry. She lands on the rock with a couple additional flaps of her wings as she settles before the cracked pecan.

Mouse begins to run out of steam as the terrain is up hill. The boulders with wide crevices require she take some serious leaps scrambling up the opposite sides after she lands.

Raven is maintaining an eye-out for her nemesis. She's entertained by the gusto in which the mouse has been attempting to return to the field. Raven sees the fur-ball in the air now and then as it makes a pathetic attempt to return in time to harass Raven.

Head up, Raven pauses with a huge piece of nut in her mouth as she stilled by the mouse's painful shriek.

"Still harassing me, are you?" Raven nibbles at her pecan.

As a last ditch effort, she cries out with a loud, "Squuueeak….." Her call for help quickly dropping to a whisper.

Mouse's head leans against the rock. She closes her eyes.

Raven's unamused by the game being played on her, "What was that?"

She returns to her nut, then quickly drops it looking for the bouncing mouse leaping across the rocky field.

Raven turns leaving the pecan searching for movement. She sighs as she sees flying fur.

"No..." Raven hops toward the boulders, "that was a chipmunk."

Before she really considers her response, Raven's in the air. Circling quickly several times, she sees nothing.

She lands where she considers she last saw the mouse. Hopping about peaking over the rocky ledges, she spies nothing.

Raven begins to rattle a call as she flits about flying from boulder to boulder.

Mouse's eyes slowly open as she realizes her fast friend has come to her rescue.

Raven is keen to hear from the mouse. She hears the soft plea.

As the last of the mouse's breath expresses a whisper of a sound, Raven is peering over the rock side at the little creature wedged far below.

Raven notices the creature's shallow breath. The body moving ever so slightly. So as not to startle, Raven calls a soft warbling tone. Cocking her head side to side, she assesses the situation.

Mouse opens her eyes just as the Raven's tail disappears. Mouse is hopeful at first watching the ledge for movement.

Finally, Mouse so very tired, closed her eyes for what she considers the last time.

High above Raven soars. A beautiful thick piece of cotton string from her stash of treasures in her beak.

Landing at the ledge of the deep crevice, she drops the string carefully while stepping on the other end.

Raven calls to the dead-like creature below. "Warble, warble, coo."

Raven holds onto the string with her beak, a steady grip, as she rolls her eyes and decides to get closer to the mouse.

Raven thinks to herself. "What have I gotten myself into?"

As tiny pebbles and sand begin to fall, Mouse stirs. Opening her eyes, she notices a wiggling worm dangling dragging across her nose.

Adrenaline kicks in. Mouse's peepers widen and she clamps down on the line in fear. Looking up, Mouse spies the backside of the raven.

Her eyes narrow as she attempts to focus in on just what is in her locked jaws.

"Mrmrmm." Mouse mumbles looking up at Raven's rear having ascertained the other end of the worm is in Raven's beak.

Seeing flashes of Raven's eyes, Mouse notices that the huge black bird is nodding. Mouse's curious return has Raven energetically bouncing her head up and down.

Mouse nods in return steeling her jaws her limbs now numb. "Ohhhhh I get it."

Raven takes strides as she leaps her way to the top of the crevice. At the top, she looks down to the mouse and flaps her wings a couple of times. The string still firmly clamped in her beak.

Mouse's eyes bulge as she realizes what's about to happen. She shakes her head, No!

Raven slowly nods an emphatic yes and flaps her wings.

Raven takes off slowly until the line is taught. Once she senses Mouse is in-the-ready, she ascends slowly thankful there is weight on the opposite end of her string. Mouse emerges from the deep crevice, limbs limp.

Raven takes Mouse up up up.

Mouse slowly opens her eyes looking up at Raven soaring above her.

"Thank you for the gift of flight." Mouse says to herself.

Mouse's eyes are wide. "Now take me down, please!"

Raven softly lowers Mouse next to her favorite pecan tree. Mouse hops around as if she's being stung as the sensation is returning to her limbs.

Raven piles her coveted string next to the dancing mouse and gestures pushing her treasure toward Mouse. Mouse pauses sniffing at the string, then crawls into its center while looking up to Raven.

"Thank you Friend." Mouse squeaks, "Thank you for looking after me."

Raven calls in return. Wings spread, she flies past the tree's limb capturing a pecan continuing skyward. Mouse, knowing her friend's routine so well, takes a moment to carry her new prize to her burrow. While dropping the pecan, Raven notices Mouse's home for the first time.

Landing on the stone by the tree, Raven pecks unmercifully at the broken pecan shell flicking pieces toward patiently waiting Mouse.

Ah yes, we carry much dialogue within when we focus without, yeah?


Be seeing you soon.

Every bit as good as I remember from this morning. Friendship can babe manifested in many ways. Eh?