Transformation Knocks | On the Journey 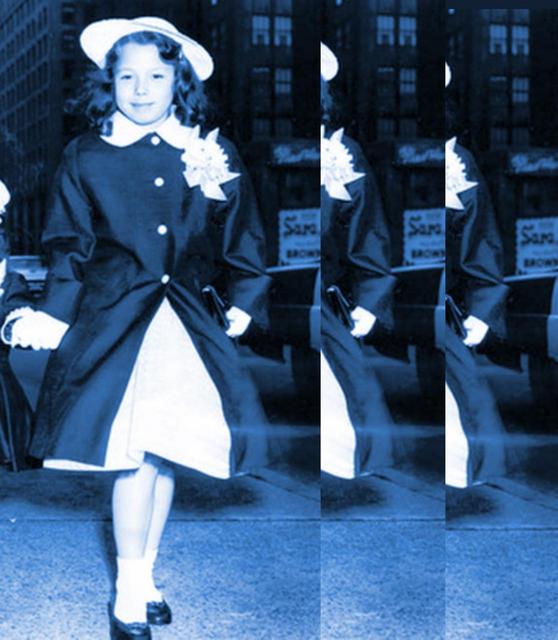 "Meredith. Pay attention!" Says her mother gently taking her hand as they cross the busy street.

The sound of car horns, cyclist's whizzing by and the clomping and clacking of feet replaces blue serenity. Meredith places the correct smile on her face and looks forward following her mother's cadence. A raven caws catching her attention causing her to smile genuinely. Her mother looks down, love in her eyes.

Her mother's hand squeezes returning Meredith to the foreign way of being. She immediately recalls the rules. The pasted smile returns to her face while the elegant black bird remains in her mind's eye. She knows to keep these moments to herself. Looking to her mother, she sees a gentle smile and 'good job' nod.

Meredith is in line.

She reminds herself that she feels connected and secure to be a part of the prescribed way of being. Meredith tells herself, she loves her friends and clothes as well as the gifts her parents regularly shower upon her when she does the right thing. Most of all, she feels secure.

Along the busy city street, Meredith spies another her age. At first, Meredith feels annoyed by her flouncing about and flowing clothes.

She thinks to herself as her brow furrows, "No gloves!"

Then, she begins to feel sorry for the little girl that is making what her mother would call a spectacle of herself. Continuing to watch through her lashes eyes downward, Meredith begins to feel kinship.

"She is doing what I feel inside." Meredith responds with a sense of envy or loss.

As she forgets herself openly observing the girl skipping along the sidewalk her legs bare wearing no tights, her mother takes notice.

"It is rude to stare Meredith. It is not your place to judge." Says her mother in a scolding tone. "You should focus. Stop messing about."

"But I wasn't…."Meredith returns with a plea.

Her mother cuts her off mid-sentence saying, "Focus Meredith or you will scuff your newly shined shoes."

Meredith quickly looks down in search for a scratch on her gleaming black patent leather Mary Janes. She expresses a long sigh of relief as her shoes shine bright in the afternoon sun that bounces off the cool pavement. Meredith returns to her thoughts of the Raven's call. With a straight back, eyes forward, proper smile, she is walking carefully in time with her mother: the trance... or so she seems to the outside world.

She is conflicted for this life promises so much. Her own way of being feels connected to something much bigger and it feels good …familiar somehow.

Suddenly, something on the pavement before her catches her eye. A wave of heat, a mirage, more like a twinkle. She is uncertain. Squinting, Meredith wills the shift to happen again.

"Stop squinting. You'll get wrinkles Sweet One." Her mother has grasped her hand once again more in ownership this time.

"Yes Mum." She replies her eyes glued to the space where she believes there is something more.

Meredith wills the space to open up to her reality. Fear rips through her. Her desire to break free is overwhelming. At the same time, she does not want to lose what she knows.

Meredith whispers. "There's no going back."

"What are you going on about? What is wrong with you today? We're going to be late for tea." Says her mother shaking Meredith's gloved hand, smiling encouragement.

Quietly focused on the gleaming spot ahead Meredith is tired of the process, the charade. She moves forward inwardly on her true untraveled path while appearing to be right in line. She is shedding an aspect of herself. The fear of not belonging nor being told she is good. She no longer has use for the previous reality that was all her own as well.

She feels alone for the first time in her life.

Meredith is drawn to adventure. To explore the sparkles before her. The space calling her.

"Why are you causing such a ruckus today? The shortbread you so love is just 10 minutes away." Her mother replies.

More determined to end this experience, her mother quickens the pace.

"This is all on me," Meredith is thinking as she struggles to keep up with her mother. "I've got this… hopefully."

She's reminded that she feels a sense of serenity in this space. As she follows the stars glowing before her, she feels peace. Her shoulders drop as her breathing deepens. She doesn't have to be something or do something that is approved, expected.

Absorbing all she can of this magickal space, she peers into the possibility within.

"I understand my mother wants to keep me safe." Meredith thinks giving her mother's hand a gentle squeeze.

Her mother looks to her and smiles.

After tea, Meredith doesn't don her soft cotton gloves. A bit uncomfortable, she places her hands in her coat taking them out in intervals to swing at her sides. She's trying it out, extending herself. It feels freeing, not rebellious. Her smile is her own as Meredith explores the city buildings surrounding her hoping to spy the big black bird once again.

What seemed impossible before becomes a potential reality.

Her mother quietly shakes her head, smiling. Believing her mother doesn't notice, she continues to explore freedom. Meredith is on her path. She continues forward, in faith, doing a quick skip here and there as they walk the busy city street returning to their apartment.

As the doorman opens the door, her fast friend, Mable, makes her way toward her. Meredith freezes in fear of what Mable will think. She considers placing her hands in her coat. Steeling herself, she keeps them at her sides her smile wide and genuine.

"I enjoyed it. Best shortbread in the city, yeah?"

She takes Meredith's hand in her gloved hand asking, "Why?"

Leaving her hand in her friend's, she responds, "It was time." smiling her new smile.

Mable jerks her hand from Meredith's and takes her mother's. Looking back, she smiles at Meredith. The pasted smile. Then, returns forward in step with her mother.

As her eyes follow her retreating friend, Meredith rethinks her choices. She rubs her bare hands together smiling. Then stops, looking toward Mable as she and her mother turn the corner.

"Come on in Mere." The doorman says inviting Meredith to move forward.

Meredith sports her free smile and spontaneously skips through the door. She hears a chuckle from behind as she meets up with her mother at the elevators. Meredith turns and gives Chester a decided nod.

Now she's on her authentic path within. Separate for now.

The stars shine as bright as the glimmer she boldly walked into. She lies in bed eyes wide unable to find the restorative slumber that is usually hers. Fear rips through her as she replays her afternoon's behavior in her mind. She feels alone. In the dark, she senses a chasm within. The embodied peace and playful spirit is unreachable.

Meredith recalls her relationships with fear. She considers the feeling that arises when she has done something wrong or not well enough. Soaking her being in the feeling, she knows what to do so she does it. Meredith embodies courage envisioning the following day.

"Tomorrow. Just tomorrow, I will explore my way of being." Meredith's will says aloud.

Meredith breathes in a deep sigh surfacing from the void. She discovers sleep on the rim that is transformation. She steps closer to fear.

Awaking, Meredith puts on her robe and paddles to the breakfast table.

"Why are you not dressed?" Her mother says over her newspaper.

A steaming cup of coffee and warm toast before her.

Meredith replies while sitting down opening the lid of the crock. "I will.  I thought I'd have some oatmeal first."

As she spoons the rich oats into her bowl, she quickly pours the milk. Sprinkling cranberries on top, her hand hovers as her mother responds.

"Well you've already cooled your breakfast with milk. So eat." She says returning to her morning read.

Meredith smiles to her mother and bowl of fruity oats. Eating, she senses the rich flavors quite unlike she has in the past.

"Did you do something special? This is so good." She says spooning another bite.

"Don't try to soften me with platitudes."

"I really do like the taste. More cinnamon?" Meredith askes.

Meredith decides to let it go and focuses on the new experience. Slowly and intentionally, she eats every bite. Feeling a sense of nourishment, she excuses herself to dress.

Taking the risk, Meredith knocks on her neighbor's door down the hallway. Mable opens the door. Looking at her friend's curious eyes, Meredith expresses her wide grin. A bit unsure, but goes for it anyway.

"Shall we go outside and play?" Meredith asks.

Mable answers, "Okay, let me get my coat."

As they walk down the hallway toward the elevator, Meredith stops.

"What?" Mable says while fidgeting.

Meredith says in a serious tone. "Mable, where are your gloves?"

She takes her friend's bare hand in hers as the elevator opens they walk toward their path.

Oh boy, this I s goof stuff. The release of the free spirit! I am reading it in the pale light of dawn my most aware moment of the day! Welcome to the world Meredith!

Beautiful Noel. And thank you!